The Minnesota Office of the Legislative Auditor has released its investigation into the suicide of Dan Markingson, finding evidence of coercion, numerous conflicts of interest, shoddy research oversight, and a pattern of defensive misrepresentations by university leaders aimed at misleading the public about previous reviews.  Press coverage can be found at the following links:

The report comes on the heels of a damning external review that found serious deficiencies in the current research protection program, as well as a “climate of fear and intimidation” in the Department of Psychiatry.

Legislators are calling for public hearings on the case, and Public Citizen is demanding a federal investigation.

Minnnesota state Senator Terri Bonhoff has asked the Senate leadership to delay all appointments to the Board of Regents until the the Office of the Legislative Auditor completes its review of the university’s troubled psychiatric research program.

Former Minnesota Governor Arne Carlson sent legislators a blistering letter last week, accusing the Board of Regents of refusing to review what they “clearly knew was a troubled area” and “perpetuating the myth of numerous and extensive investigations” into research misconduct at the university.

Hospital whistleblower speaks out about Markingson death, culture of fear at Fairview

Nike Gjere, a senior psychiatric nurse at University of Minnesota Medical Center – Fairview, has given powerful testimony about the recruitment of Dan Markingson into the CAFE study, as well as culture of fear that has prevented hospital employees from speaking out. You can see the video report on KMSP television (Fox 9) here.

The University of Minnesota is paying nearly $142,000 for a research review by AAHRPP — the very company that has “accredited” its research oversight program for years. In turn, AAHRPP has appointed a reviewer who consults for Quintiles — the very company whose recruiting tactics in the CAFE study led to the current call for a review.

Is this a problem? Not according to the University of Minnesota.  But many critics are calling the review a sham. There is coverage of the issue in The Star Tribune, City Pages, The Pioneer Press and the Minnesota Public Radio “On Campus” blog.

“After a series of reports from the Fox 9 Investigators, Minnesota’s legislative auditor will turn his eye to review 10 years of drug trials conducted by the University of Minnesota’s Department of Psychiatry.

After a second patient came forward about his experience, state lawmakers sent a letter to Jim Nobles and asked him to take action.

‘We believe it is important to know how many subjects have died or been seriously injured in psychiatric research studies undertaken at the University,’ the letter read in part.

Nobles told FOX 9 News he will launch an investigation that looks at the past decade of drug trials — including the case of Dan Markingson, a research subject who died trying to decapitate himself.

The Fox 9 story is here.  You can find additional coverage on MPR and in the Minnesota Daily.

“Medical students have a critical role in speaking out about ethical misconduct, advocating on behalf of our patients, and ensuring that appropriate care is provided to all–including mentally ill patients subjected to exploitation by the pharmaceutical industry and its research mills.”

Read more in the Bioethics Forum.

Does it really take a coffin and funeral flowers to get the attention of the Board of Regents? 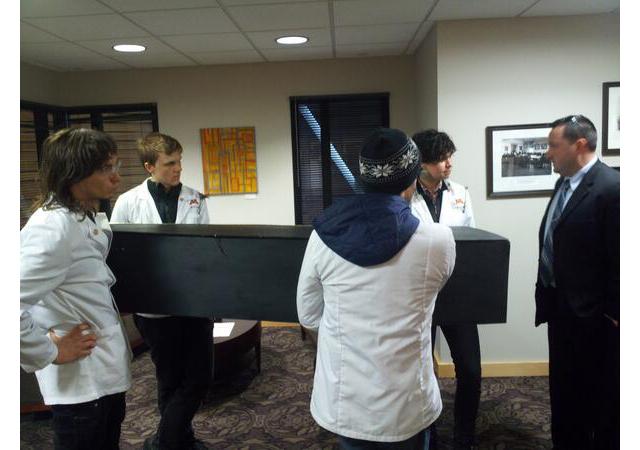 On May 9, a group of students, faculty members and concerned community members held a vigil in remembrance of Dan Markingson outside the McNamara Alumni Center, where the Board of Regents was meeting. We then interrupted the Regents’ meeting and presented them with flowers in Markingson’s honor. Four students wearing white coats carried a coffin to the door of the meeting room, where they were stopped by campus security guards.

Later, in public comments, Leigh Turner, an associate professor of bioethics at the U, asked the Regents, “Why are open-records requests to obtain such data (about deaths and injuries) routinely stonewalled? Are you ready for the possibility of multiple lawsuits brought by victims of psychiatric research misconduct?”

KMSP News: Another victim of psychiatric research abuse at the University of Minnesota

On Monday evening, KMSP News aired a stunning report of yet another mentally ill man whose harrowing story mirrors that of Dan Markingson.

The man, identified as Robert, was apparently pressured into a pharmaceutical industry study of an unapproved antipsychotic drug.  “I was incompetent and didn’t know what I was doing,” he told the KMSP reporter, Jeff Baillon.  “Then, they say you have a giant medical bill and if you do the research, you won’t have this giant medical bill.”

He says he was told the unapproved drug was safe, yet the FDA soon rejected the drug, asking the sponsor to look into the death of a research subject who had died of liver failure shortly after taking the drug.  Several months later, the sponsor halted all studies.

Robert said the side-effects of the drug were so severe he considered suicide.  He went to the Fairview emergency room three times, once by ambulance, yet the researcher in charge of the study dismissed his symptoms as “psychosomatic.”

You can read the story here:

Successful Action at the Board of Regents meeting last Friday

Friday’s vigil and action at the Board of Regents’ meeting was a great success! The credit goes to an extraordinary University of Minnesota medical student, Eden Almasude, who planned and led the demonstration; her fellow medical students with Physicians for Human Rights; and the gutsy members of Students for a Democratic Society.

Here’s the way it played out. After a vigil outside the McNamara Alumni Center, a group of four students wearing white coats carried a black coffin to the door of the Board of Regents conference room, where they were confronted by security guards. Soon afterwards, several dozen demonstrators filed quietly to the front of the conference room, where each of us presented a single flower to Board of Regents Chairman Richard Beeson. Beeson responded by shouting into the microphone and threatening to have the room cleared. It was very satisfying.

Later in the public meeting, Leigh Turner, a professor in the Center for Bioethics, delivered a blistering speech to the Regents about their baffling refusal to address mounting evidence of research abuse and misconduct in the Department of Psychiatry. He was followed by two SDS members, Johnathon Walker and Chris Getowicz. All of them were shouted down by Chairman Beeson as their time at the podium expired.

You can see photos, video and speeches on the Facebook page for “Community Alliance for Ethics in Minnesota Psychiatry.”

For those of you who could not be there: our call-in campaign to the Regents and Governor Mark Dayton is still ongoing. Please voice your support for the cause by sending an email message to Brian Steeves, Executive Director of the Board of Regents, and cc-ing the email to Governor Mark Dayton. We have two questions:

1) How many research subjects have died or been seriously injured in psychiatric research studies at the university since the current Chair of Psychiatry, Dr. Charles Schulz, was appointed in 1999?

2) Why is President Eric Kaler refusing to investigate the suicide of Dan Markingson?

Then go to this website and send it to Mark Dayton.

Thanks again for all of your support. We do appreciate it very much.